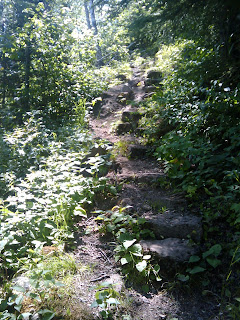 My back bent, thighs screamed and mind faltered as I trudged my 60 lb, external frame Kelty backpack up the seemingly never-ending switchbacks. My footfalls were carefully selected to avoid the jutting rocks and loose soil to avoid any turned ankles or trip-ups. The trail rose in switchbacks between false summits that made the ice fields I sought to spend the night out on elusive. It was only going to be 3 miles, or so, but the mountain slopes rising from the Ocean rose abruptly and unforgiving. The Alaskan coast also enabled thick temperate rainforest vegetation to grow rampant and wild. It clawed at the damned exposed backpack frame, threatening to toss me ass-over-tea-kettle down the trail, or worse yet, off the trail and down the glacier. I vowed to buy one of those new, sleek internal frame jobbies when I got back home. When I was a child, my parents called me their “little mountain goat” due to my uncanny ability to bound over 3rd class terrain (talus and boulders) with ease and confidence. What happened? My protesting knees, aching from another backpacking excursion earlier in the trip, were beginning to question all of this damned abuse, so I stopped for a rest over my trekking poles. I envisioned looking something like a Salvador Dali figure at this point; a thin, transparent, damned apparition being help upright by grotesque crutches. It was at this point a thunderous report of kinetic energy rushed down from above. Being bear (read: enormous) country, I was immediately panicked, but to my surprise and bewilderment it wasn’t a Brown Bear rushing me. Instead something far more absurd seemed to fly down the trail. Three young men free falling—no, running—down the mountain, while laughing, blazed past me completely unencumbered. They had run up the Exit Glacier trail I was crawling up, turned around, and then headed back down for home. Running this trail seemed completely out of the realm of possibility to my close-minded 1980’s backpacking mindset. It was the era of heavy, slow and over-armored clothing and heavy boots, not “light is right.” At least not for the contemporary backpacking world. I set my ridiculous backpack down and began re-evaluating my approach to movement in the mountains right there.

Setting out to run a 13.3-mile section of the Superior Hiking Trail (SHT) is really no big deal for accomplished trail runners. Apparently, I’m not accomplished, yet. I have set my feet down on the majority of its segments, some sections several times, so am much acquainted with its rigorous nature. Its vertical relief isn’t as impressive as the Coastal Ranges, the Rockies, the Alaskan Range or even the Appalachians. That is, if you were to look at it via a coarsely-scaled topo map. Its verticality is measured, as far as the hiker or trail runner is concerned, in a finer scale of nearly continuous, repeated, steep, ups and downs. Most of its single-track is littered with uneven footing; the result of a tremendous amount of rocks and roots jutting through the soil. My hiking experiences on trails throughout North America, especially the SHT, taught me how to move effortlessly through this sort of terrain at around 3 mph throughout the day. I was about to learn that none of this mattered when the hiking shoes are replaced by running shoes. Neither was my level of fitness and confidence related to the urban trails and paved runs of the Twin Cities.

I had a tremendous few weeks leading up to this weekend. Trail runs at Afton SP, Fort Snelling SP and my road runs were getting faster and easier by the run. In fact, my 10-mile pace at the demandingly hilly Afton were breaking 10 minutes (I felt great for a beginner like me) and my hills and speed workouts on the pavement were really improving. My urban exploits were tough efforts and very productive. Since I was planning on going to spend time with my Father, Step Mother and family at the cabin on the North Shore, I was excited test my fitness on the familiar, challenging ground of the SHT. Of course, I have heard from other trail runners that the SHT is a monster and considered to be very technical and physical, but hey, it’s an old friend of mine and I was feeling pretty good about my progress.
Shit! I left that extra 20 oz’s of Electrolyte/Carb/Amino Acid drink mix in dad’s truck and he’s already pulled off through the woods leaving me at the trail head with my measly 12 oz’s of mix, 3 shots of Hammer Gel and 2 liter water bladder. OK. It’ll be tougher in this 80+ heat, but it’s training, so this extra suffering will serve well at some point. Some nervous, token stretching, some excited pacing and then I’m off down the nearly hidden trail towards the Temperance river 13+ miles distant. That first 1.5 miles is always a little tough for me as my body slowly relaxes and softens up to the effort. This time, however, the heart rate doesn’t seem to want to taper back down to its distance pace after the “warm up.” Probably due to needing to concentrate my whole body on preparing for each chuck and jive around the roots and rocks I’m encountering. Man, this section’s track is really narrow. The sedges and grasses sometimes completely cover my view of the running surface…gotta slow down a bit, no, a lot or I’m taking a header, for sure. Running on this terrain is NOTHING like hiking. The trail is a completely new animal now. I dug deeply for that little mountain goat deep inside me as I focused my attention to reacting within a split second to the consistently variable running surface (no, that’s not an oxymoron).

I picked this section of the SHT because it supposedly started out high, eased over some terrain, crossed the Cross River Valley, then rose up and over the ridge down into the Temperance River Gorge. It was supposed to be relatively casual for SHT, but I must have forgotten about how convoluted this trail is. It was designed to bring you through terrifically varied terrain and up to as many vistas of the landscapes as seen from high as possible. That frequently means a whole lot of up and down action and I was being reminded of this fact over and over again. Ah yes, training. Find those spaces between the obstacles and avoid tripping up. Get over the fact that it’s too damned hot to be doing this and the electrolyte levels in your blood stream are too low to help you assimilate water that you need to run the Kreb’s cyle that will enable you to get to the end of the run. Ignore the burning thighs and calves on the steep uphills…oh yeah…I should be walking these! Try to will your rubbery legs to support your controlled falling on the downhill runs. Drink, Gel, drink, gel….there goes the last of the electrolyte mix. There goes mile 10 and finally the Cross River. Now suck it up and work up the slopes of the gorge to get to the top of the next ridge overlook. How the hell did a friend of mine just do the entire 205 miles in a little over 4 days? That’s an average of 50 miles/day for 4 days over this horrendously rocky, rooty, narrow and steep up and down brutality! She must be superhuman. But I’ve seen her fail at things just like us mortals…either way, superhuman or just really gifted and fit, I’m blown away by what she’s done on this track.

I'm suffering now and it’s not an unusually long run for me. It is, however, the hardest run I’ve ever done. I remind myself to enjoy scenery and to relax by trying out some mantras on in and out breaths. I try to say out loud “focus on the fun, not the negative” knowing well that this part of my training is likely 200% more important that the physical side. In doing so, I’m avoiding the pitfalls of mental rocks and roots poised in my path to topple me or hut me down. I need to find that firm, welcoming footing between the mental obstacles. It’s working again and my body physically rewards me with a little more energy and less intense revolts from dehydration; although the water deficit is becoming almost alarmingly apparent. I am reminded of my first trip the Tetons where a slower partner set our summit day at 24 hours of effort resulting in severe dehydration by the time I got back to the climbers ranch the next morning. Shit, I don’t want that to happen again…get a move on and get over this ridge so you can get down the slopes to the Temperance and the van.

Now the long, steep, loose descent to the Temperance was even demanding. I hoped for things to ease off a bit as I was about to run out of water and I wasn’t feeling so well, but this was one long descent on rubber legs. I watched my Garmin report the news like an ongoing news flash. My 10 minute pace, long gone, was slipping past 12. Crap! I haven’t been this slow in over a year. Now it’s approaching 13 min/mile…is there anything I can do to salvage my pace? Nope. By the time I reach the Temperance I’ve slowed to 13.3 min’s/mile and it’s all I can do to run the bedrock trail downstream to the van. I run past sun bathers and swimmers along the river. Tourists and families, out for a beautiful day hike off Highway 61 up to the deeply cut channel of the Temperance, either nervously smile or reluctantly step aside as I make a desperate attempt at salvaging my pace and composure. I was really salty. I wondered about my face and how wretched it must have appeared.

I resolved myself to picking my tired body up and shouldered that damned heavy load up and over the last bluff leading to the ocean of ice that formed the ice fields hanging above Seward, Alaska. I worked a ways out onto its expanse and marveled at the surrounding peaks whose summits rose out of the sea of ice. I drove 12-inch barn nails into the ice and cracks in the rock so I could fasten tarps over my crappy little tent as I expected some unstable weather ahead. For the next twelve hours, I held that tent together in a storm that ravaged with near hurricane-force winds and sleet. I came here for the experience. I prepared for it. Perhaps a bit naïve, but seasoned enough to withstand the demands of the situation. I had to force my mind to look for those places where there was firm footing and to focus on the experience without attaching good or bad connotation in order to see clearly and persevere.

It seems that the most important accomplishments are not those measured by the obvious trophy (e.g., the summit, the finish line, the big contract), but, rather, those little moments of pure clarity where the footsteps and efforts fall with precision when they could have either led to falling or were simply not taken at all due to the arduous effort. Choosing to do something then finding those choice footfalls between the dangerous obstacles may lead to a seemingly big goal, but each of those instants is the real reward. The SHT redefined what “hard” running is and adjusted my reference for what effort really means. I’m grateful the experience came at this phase of my training as everything from this point on will be measured against it and be that much easier, or drive me to push that much harder.
Posted by Shawn at 9:14 PM

Labels: The character of the SHT